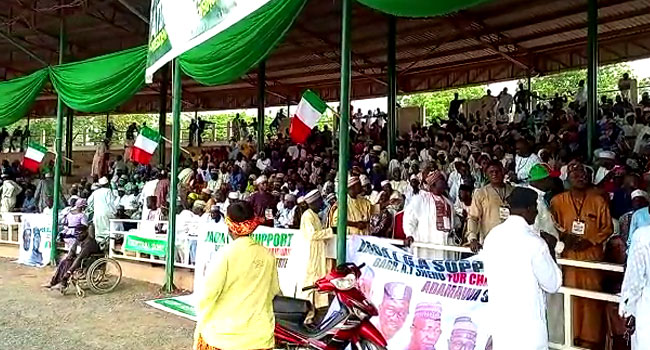 In this screengrab taken on October 16, 2021, PDP supporters storm the Ribadu Square in Yola for the party’s state congress in Adamawa.

The All Progressives Congress (APC) and the Peoples Democratic Party (PDP) are conducting state congresses across the states of the federation.

The state elections follow the conclusion of the ward and local government congresses, as well as the appeal process.

When concluded, the exercise will lead to the emergence and change of guard of state officials that will pilot the affairs of the parties in the states for four years.

But the PDP is conducting the exercise in seven states – Oyo, Kwara, Lagos, Adamawa, Borno, Kebbi, and Ebonyi.

Some of the states where Saturday’s congress is taking place are those where the party has legal issues, where the state structure has been dissolved, where there is an internal crisis among members, or where there are cases of expiration of existing structures.

Adamawa State Governor, Umaru Fintiri, and Former Vice President Atiku Abubakar were among party leaders who voted in the election at the Ribadu Square in Yola, the state capital.

According to the party’s leadership, the conduct of the elections is necessary to ensure a proper constitution of the party’s structure in the states ahead of the PDP national convention.

The national convention has been scheduled to hold from October 30. 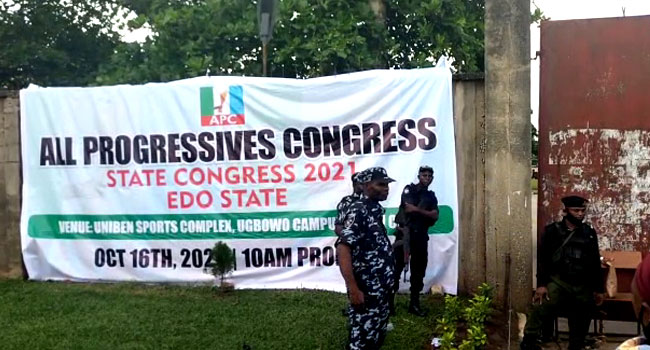 A screengrab taken on October 16, 2021, shows some policemen at the venue of the APC congress in Edo State.

Meanwhile, scores of APC members were already at the Sports Complex of the University of Benin in the Edo State capital at about 9am to participate in the exercise.

In Ogun, the exercise is taking place at the Moshood Abiola Stadium in Abeokuta as authorities deploy security operatives to strategic locations to maintain law and order.

Channels Television crew at the venue reported a calm and peaceful atmosphere, as delegates from the 20 local government areas of the three senatorial districts of the state participate in the congress.

About 100 aspirants are expected to vie for the 35 contestable positions to fill the offices of the state chairman, secretary, and publicity secretary, among others.

While the option of a consensus has been adopted in line with the party guidelines, an election is inevitable where there is no agreement.

On Wednesday, the leadership of the APC inaugurated the party’s State Congress Committee chairmen and secretaries who would conduct the elections.

APC Caretaker Committee Secretary, Senator John Apkanudoedehe, who inaugurated the officials at the party’s secretariat in Abuja, asked them to sustain the gains already made by the party’s leadership.

He also appealed to the officials to work hard and prevent disagreements that could affect the party’s fortunes in 2023.

Sound Sultan’s wife celebrates him on his first posthumous birthday